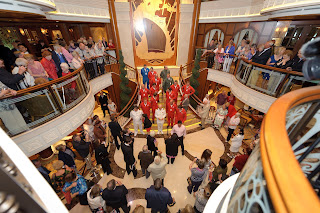 The spectacularly splendid dawn of the Queen’s Diamond Jubilee Bank Holiday Tuesday came up to reveal an historic sight at Southampton as the special convoy of the three ‘Queens’ of the Cunard fleet hove into sight. These hugely impressive liners, the Queen Victoria, the Queen Mary 2 and the Queen Elizabeth, made their stately way in line up the Solent to the Docks, all together for the very first time as part of the largest Jubilee celebrations anywhere in the UK outside of London over the special extended weekend to celebrate 60 years of Her Majesty’s reign over us all.


Her Majesty the Queen has long been associated with Cunard, being the only person to have attended the naming of all three Cunard Elizabeths, from the original Queen Elizabeth in 1938, then Queen Elizabeth 2 in 1967, and finally in 2010, the new Queen Elizabeth.


For the 50-strong crew of the FTF Worldwide Event Management team the arrival of the three Queens on Tuesday, June 5th, was the start of an exciting but exhausting day in Southampton devised to celebrate the Queen’s Diamond Jubilee and to be executed by the company. This was the culmination of months of research, meetings, discussions and meticulous planning with the Cunard executive, Southampton Docks, G4S security and the Association of British Ports in order to conceive, oversee and execute the whole event from start to finish.


This special day of celebrations, run throughout by the FTF Worldwide team, were due to include another ‘first’ when the famous Red Arrows aerial display team should have performed their astonishingly daring and also meticulously planned ‘aerobatics’ over the three Queens, Southampton and the Solent, never before having flown over the area solely for the delight of the ships’ passengers as well as the wider locality. However, the glittering dawn had, by then, given way to rain and very low cloud which prevented the display from taking place – a circumstance wholly outside the control of the FTF team, to their immense regret.


But then later, when the low cloud had lifted somewhat, in an extra highlight to this glorious and joyous day of Jubilee celebrations, all this careful planning was in evidence once again with a spectacular musical firework display from FTF Worldwide above the re-positioned ships, now moored around City Terminal and all fully boarded with their passengers for their own special Jubilee celebration cruises.


This stunning firework display, especially designed to use 2012 individual fireworks to mark the Jubilee and which included only aerial effects that burst over 300 feet in the sky above the ships, was fired from opposite City Cruise Terminal over the three Queens, sitting closely together in the docks in Southampton.


The firework display, produced by Fully Fused Fireworks, was the largest in the UK in 2012 with the exception of the Olympic Games and London New Year’s Eve displays. The display took 20 man-days to prepare in FTF’s factories in the UK and Europe and then required ten qualified technicians two days to organise the eight tonnes of equipment and load the fireworks for the show.

The fireworks lit up the night above the three ships as the climax to a very special day, a fitting tribute to our Queen and her 60-year reign that was literally sparkling, at once both ethereal yet substantial, instant but sustained, regal but with the common touch; a splendid and majestic celebration of colour and effects that was specially created for this auspicious occasion.

The display was accompanied throughout, not only by the usual ‘whistles and bangs’ of regular fireworks, although these sounds were indeed huge, exciting and dramatic, but also by a creatively devised and orchestrated musical soundtrack that was simultaneously broadcast on 87.7 FM, Cunard’s own radio station specially set up and managed by the FTF Worldwide team for this occasion only.

With the departure of the Three Queens at 11pm that night, this special day of Jubilee splendour came to an end as they sailed away, lights ablaze, leaving behind them a lingering echo of the day’s celebrations that resonated throughout the area – thanks to the combined efforts of the FTF Worldwide team as they headed off for a well-earned rest in the wake of all their combined efforts in executing a splendid celebration for Cunard of the Queen’s 60th Jubilee in Southampton.

1. FTF Worldwide Event Management supplied the following services to Cunard for the Three Queens Diamond Jubilee celebrations in Southampton:
i) The provision of press helicopters to monitor the arrival of the three Queens at Southampton and for photography and videography
ii) The engagement of The Red Arrows for the occasion as the only aerial display outside of London that day
iii) The setting up and management of Cunard FM radio station throughout the day for simultaneous broadcasting of pyro-musical effect, celebrity radio interviews and music
iv) The design and execution of a professional firework display especially created for the occasion
v) Live social media streaming throughout the day
vi) The installation of PA system on Blue Funnel Ferries with feed to Cunard FM
vi) The sponsorship of SS Shieldhall - www.ss-shieldhall.co.uk - to enhance the ship’s opening to the public for the day
Vii) Provision of lighting of the ships bows during the hours of darkness

3. The FTF Worldwide Event Management company is led by experienced event managers from every field that excel in the production and management of all types of events, from parties and weddings to corporate days and both indoor and outdoor concerts. Our clients are always Number 1 with us, no matter their budget, and that’s why it works – we plan it, execute it and see it through to the end, no matter how many or how few the elements. It’s always the same, experienced team at the helm, seeing the whole event through to the very end.
Quality Events in the UK and Worldwide, delivered on time and on budget
Contact:  Tel: 01462 817640; info@ftfworldwide.com

Posted by FTF Worldwide Event Management at 01:57 Links to this post

Well, as it's difficult with all that we do to keep up with a formal newspage we've decided to use a blog to give you an idea of the types of projects we undertake. Check back regularly to see the exciting (and not so exciting!) things we get up to at FTF Worldwide Event Management. Welcome aboard!

FTF Worldwide Event Management
An event management company led by experienced event managers from every field who excel in the production and management of all events; from parties and weddings to corporate days and indoor or outdoor concerts. Our clients are always number one - no matter their budget size. We've arranged events for small 18th (and younger!) birthday gatherings as well as events for multi-national companies. It's always the same small experienced team at the helm guiding you through your event. That's why it works - we plan it, execute it and see it through for you; no matter how many elements to the task. One or one thousand and one - FTF Worldwide Event Management is there to support you through it and make your dreams reality - big or small.